Is it Wednesday Again Already Hodgepodge?

Time for another installment of Wednesday Hodgepodge brought to you by From This Side of the Pond. Let's see what questions Joyce has come up with this week. 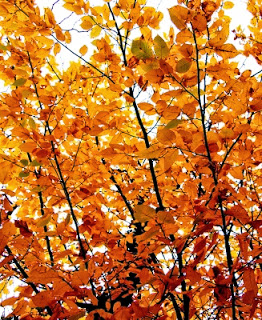 1. What was your biggest worry five years ago?  Is it still a worry?

Who can remember? There is a moral in that, isn't there?
2. Yesterday (October 15th) was National Grouch Day...what makes you grouchy? What cheers you up when you're feeling grouchy?

Being too busy, hungry, or tired makes me grouchy. I'm cheered by a good book, a good meal, rest, or something to laugh at.
3.  In one word, how does it feel to be photographed?     Yuck.

4. Besides your parents, who would you say had the greatest influence on you in choosing your life path?  Explain.
I really can't think of anyone who influenced my life plan.
5. The crisp days of autumn are here ...what's something you like to eat, but only if it's crisp?

Crackers.
6. What's the most useless object you own?

The object I'm thinking of is quite useful, except I've never used it. It is the food dehydrator given to us as a gift 15 or 20 years ago that hibernates in the back of a corner cupboard, brand new and never been used.  I can't part with it because I am going to use it someday. Truly.

I can't pin this down to one specific time, but a favorite memory I have is walking through piles of leaves shuffling my feet and kicking the colorful leaves up in the air
8.  Insert your own random thought here.

Two of my kids seemed to have had food poisoning this week on two different continents. Poor sweeties. Wish I could have been there to comfort them and offer ginger ale.

Invasion of the Mannequin Snatchers?

I don't go clothes shopping very often mainly because I don't enjoy shopping. Every now and then I'm in the mood, or need a piece of clothing and so, I go. Which is what I did one morning last week.

While I was standing in line I vaguely noticed a man's plaid shirt and  dark green down vest on a mannequin near the cashier area. It wasn't until I was in bed that evening (after a very short and successful shopping trip) that I considered the mannequin. It was one of those greyish-whiteish somewhat featureless forms resembling ancient Greek statues that have been left out in the elements for centuries.

And I wondered. Whatever happened to the ubiquitous humanoid Barbie doll mannequins I grew up seeing? Do you remember them? The females had plastic-y hair styled in bobs or flips. Their red pouty lips smirked and their arrogantly staring eyes were stylized with horrendous blue eyeshadow (whoever thought blue eyeshadow ever looked good on anyone real or plastic?). Their shapes were Barbie doll hourglass perfect and they had bare, toe-less feet. The male Ken doll cohort stared at passersby with blank blue or brown eyes and a perfect plastic pompadour of blond, brunette, or brownette.

So, they were actually the thing of nightmares.

And the replacement models are no more endearing with their sometimes bald heads and bland, androgynous, often featureless faces (but continuing to possess  Barbie and Ken style bodies).

When did the new models replace the old? I don't actually remember the take-over.

The question, however, that really disturbed me as I lay sleepless that dark, hushed night was, what happened to the thousands, or maybe millions of humanoid mannequins? Did semi trucks quietly rumble down discreet back alleys, park in the shadows of closed buildings, soundlessly open their doors, silently steal into stores and kidnap the mannequins? Did the bland-faced mannequins plot a silent coup? Did stores open one bright, cloudless morning and discover featureless zombie mannequins had replaced the garishly shaded faithful mannequins of old?

Did hundreds of semi trucks travel along the highways of America stuffed full of naked mannequins? Where did they take them? Are they in mannequin Guantanamo? Incarcerated in cold, dank, abandoned warehouses? Were they dumped in dozens of landfills across our beautiful land and crushed to smithereens?

Someone needs to investigate this and discover what happened to the missing humanoid mannequins.

The electrician came this week to do some stop-gap repairs to the circuit-breaker box. The refrigerator kept getting turned off when the breaker switch flipped. There is a larger repair looming on the horizon.

After two days of rain, I noticed a small stain on the living room ceiling this afternoon that wasn't there before. The roofer will look at it on Monday, but we have two more days of rain ahead of us.

And I woke up with a sore throat that hasn't gone away.

If the LORD had not been on our side-- let Israel say--
if the LORD had not been on our side when men attacked us,
when their anger flared against us, they would have swallowed us alive;
the flood would have engulfed us, the torrent would have swept over us,
the raging waters would have swept us away.
Praise be to the LORD, who has not let us be torn by their teeth.
We have escaped like a bird out of the fowler's snare; the snare has been broken, and we have escaped.
Our help is in the name of the LORD, the Maker of heaven and earth.
(Psalm 124)

Yes, an ordinary week, but lived with faith in an extraordinary God.

1. Write for 5 minutes flat – no editing, no over thinking, no backtracking. 2. Link back here and invite others to join in. 3. And then absolutely, no ifs, ands or buts about it, you need to visit the person who linked up before you and encourage them in their comments. Seriously. That is, like, the rule. And the fun. And the heart of this community.

You can find me here